Posted on April 3, 2013 by rjfacilitator

Seattle is under a microscope, this may, if history is any indication, be a good thing.  Disproportionality is a nationwide problem.  It happens in nearly every district in every state, some districts are under investigation.  Seattle Public Schools has joined this small group.  This is an explanation of what happened in Oakland.  Much of this post was informed by a conversation with David Yusem who is the Restorative Justice Program Coordinator at Oakland Unified School District.  This may inform our journey.

Oakland went through a similar process to what Seattle Public Schools is going through now.  There was an investigation into disproportionality in discipline, triggered by an report by the Urban Strategies Council (one wonders if “Reclaiming Students” was a factor 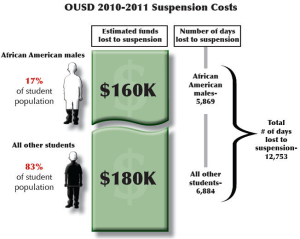 While the report had recommendations I want to focus on the voluntary agreement that was ratified by the OUSD 27th of September, 2012.  This was a voluntary agreement largely because OUSD was aware of the problem and was taking direct action to address the problem.  Even though the rates of suspension had largely stayed constant over the last 6 years.  The agreement (Read here) includes several pieces but two of note and of particular interest are the rejection of Zero-Tolerance policies and the Adoption of Restorative Justice policies (OUSD whole school implementation guide).

Moving forward, I wonder if the Office of Civil Rights will view our District in the same light, one that has good intentions or one that has given lip service to the problem of disproportionality.  From my discussion with David I found his perspective on this process positive.  I hope our district sees this as an opportunity to do the hard work to change cultures.  An opportunity to turn a voluntary process in to a mandatory and monitored process.

Restorative Justice in policy for Seattle Public Schools?  I think it is in the future.

My experience, education, and passion have met in alternative discipline. Through my policy work and my mediation experience I have worked and studied the dynamic components of discipline in many settings. While Restorative Justice is not the only way to approach conflict in communities, it has provided me an effective model in which to examine and engage in conflict. We provide custom programs for schools, colleges, and youth serving agencies seeking to engage with conflict using healthy and sustainable tools.
View all posts by rjfacilitator →
This entry was posted in School to Prison Pipeline and tagged oakland, OUSD, Restorative Justice, Seattle Public Schools, Urban Strategies Council. Bookmark the permalink.